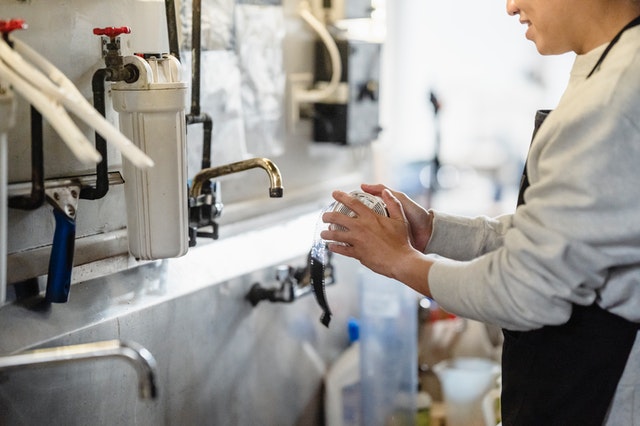 Noisy pipes are popular occurrences, particularly in older houses. Although strange noises coming from the pipes might be irksome, they can be worrying.

No one wants to experience plumbing issues, the prospect that conjures up thoughts of different kinds of nightmare situations, from expensive replacements to emergency leaks.

Luckily, noisy pipes may not be the cause of an alarm if you deal with them properly. The issue normally lies with simple problems, which you may either handle yourself or call upon an expert. Some of the reasons that could result in the knocking of pipes include:

If you notice a knocking or ticking sound coming from the pipes, which sounds like a person tapping on the other end of your house’s walls, you may assume that someone is definitely running hot water.

The major reason for this sound is the expansion of piping materials, especially if you have PVC pipes. The heat coming from the flowing water may lead to rhythmic ticking noise as the plastic expands, making the pipes rub against each other or nearby construction materials.

If this bothers you a lot, try to lower the water heater’s temperature to control it. Alternatively, you may consider insulating the pipes.

If you are not sure this is the cause, be sure to get a threaded water gauge. In case you don’t have one, you may get it at a low price in any plumbing store or home improvement shop.

According to Into Plumbing and Heating, many modern houses are also equipped with an effective pressure regulator mounted where the supply of water enters. If your house lacks a pressure regulator, consider installing one professionally.

Whatever the conditions of your plumbing system, one thing is for sure – you will encounter replacement and repair problems around your house, which require help from an expert.

If you start noticing a loud knocking noise only when you shut off the water and not when it is running, probably your plumbing is suffering from the water hammer.

Basically, the water hammer results from the valve shutting down suddenly, making the water bang into the valve. If your house was constructed before 1960, this might be a simple problem to handle.

Many older houses have an air chamber installed, which you can fill with water. Running your faucets at once after shutting off the water means you will be able to drain excess water from the pipes, making the water hammer stop.

Newer houses also come with a water hammer arrestor that serves as a shock absorber for pipes. If your arrestor has failed, you will need to call a reliable plumber to install a new one.

If you’re using copper pipes in your home, you may start hearing knocking noises coming from the plumbing system. Usually, copper pipes expand as the hot water passes through them. If your copper pipes are in a very tight place, they may expand and noisily rub against one another.

In many cases, contracting and expanding copper pipes may result in leaks. Unless you’re carrying out remodeling tasks, there will be no reason to add additional padding around the pipes. The best solution can be to lower the temperature slightly.

Over time, the pipes that supply you with cold and hot water will work themselves loose from the straps. The high water pressure, which passes through pipes, makes them knock against the walls, which they are intended to be secured to.

This noise will be more pronounced if your walls are made of concrete blocks or bricks. The noise will only happen when your water runs. Once you turn off the shower or faucet, the sound will also stop.

If you’re dealing with loose pipes, install or tighten straps to secure the pipes and get rid of the problem. You also don’t want to anchor your pipes tightly as they may contract and expand with temperature changes.

People don’t give much thought to the physics behind the water pressure, but in reality, typical residential homes push water through pipes at around 75 psi.

Municipal water suppliers at times deliver water at high pressure in order to serve high-rise buildings or fire hydrants, making the pressure reach and go beyond 100 psi. The energy that this pressure creates puts strains on pipes, at times making them shake or vibrate.

When you install pipes, they get attached to the structural beam by metal brackets or straps. With time, high water pressure will cause movement in pipes, making them rattle against the structure and loose restraints. This movement establishes a repetitive knocking sound and results in serious damages to your pipes if left unattended.

7. New Appliances in the Kitchen

Unlike many pieces of equipment, washing machines and dishwashers are operated electrically and can immediately stop the water from flowing. When this happens, the water will develop a shock wave, which results in knocking or banging.

Issues related to air entrapment will be minimized by preventing the air from accumulating inside the system. You can accomplish this by using an air-relief valve positioned at the high point of your piping system.

In places of relatively flat terrains, you should place these at the downstream end, vicinity of the pump discharge, and near the line. You can also fill empty pipelines slowly in order to allow the entrapped air to escape.

Knocking water pipes are alarming, but their bark is worse than their bites in many situations. Although several pipes are in accessible and visible spots inside your houses, others could be inside the ceilings or walls.

Immediately you identify the cause of your pipes making a knocking noise, you will be able to determine whether you may fix the issue yourself or hire a plumber to do the job